Zoltan Bodnar – local player in the 1970s and well-known amongst problemists, passed away earlier this year. (source: Nigel Hanrahan)

Nigel indicates that Zoltan was published in ‘The Problemist’ 8 times between 1976 and 1991. See http://theproblemist.org/mags.pl?type=tp

Cecil Rosner most recently published one of his problems in 2014.

He won the Winnipeg High School Championship in 1968 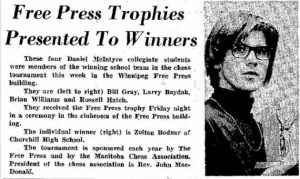